A Bloody Mary or Bloody Caesar is typically enjoyed during the morning or early afternoon. Whether these drinks are consumed as a “hair of the dog that bit you” cure or enjoyed as a brunchtime treat on the weekend, they’ve have gained quite a reputation.

While some believe that these two cocktails are the same drink because of their similar-sounding name and their main ingredient of tomato juice, the two are distinct drinks that have their own unique histories and ingredients.

What’s in a Bloody Mary? 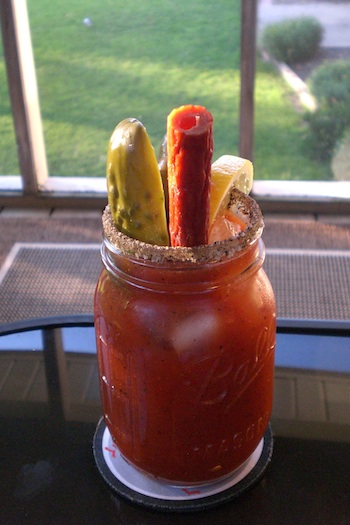 The Bloody Mary was originally mixed up in the 1920s by Fernand Petiot, who was an American bartender working in Paris. His cocktail originally had equal parts tomato juice and vodka. When he moved to New York City years later, visitors to the King Cole Bar at the St. Regis Hotel — the place where Petiot was working — thought his recipe was lacking in flavor. In response, with a bit of Worcestershire sauce, TABASCO pepper sauce, lemon, black pepper and cayenne pepper, the bartender created what is known today as the Bloody Mary.

While there are many variations of the Bloody Mary, at its core, it’s still based on tomato juice and vodka. Then, with some Worcestershire, citrus and spices — and garnishes, of course — you have a Bloody Mary.

What’s in a Bloody Caesar? 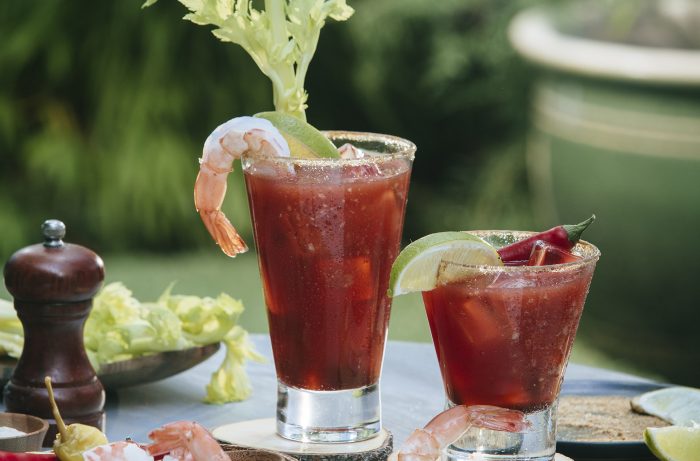 Today, this drink is one of the most popular cocktails in Canada. Usually, it’s made with the “one, two, three, four” rule, which comes to 1 to 1.5 ounces of vodka, 2 dashes of TABASCO, 3 dashes of salt and pepper, 4 dashes of Worcestershire sauce and then 4 to 6 ounces of Caesar mix with ice. Just like the Bloody Mary, however, it has many versions, and there are endless options for garnishing this clam-juice-spiked tomato cocktail. 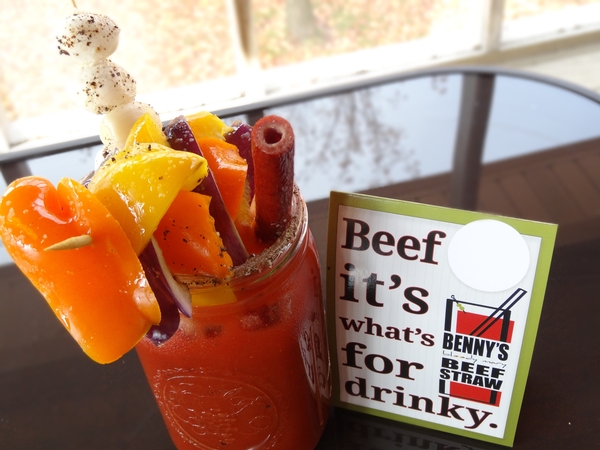 The Bloody Mary and the Bloody Caesar both have a focus on garnishes used to add visual appeal and flavor. Most of the time, these cocktails will feature a celery salt glass rim and a lime wedge and celery stalk. Some versions also have garnishes of olives, beans and pickles. For the more adventurous drinkers, everything from bacon to a pepperoni stick can be used as a garnish.

While both of these drinks feature a tomato base and similar garnishes, what exactly is the difference between them? The main difference is the Clamato. Unlike plain tomato juice, which is used to create the Bloody Mary, Clamato is a blend of tomato juice and clam juice. The clam juice adds much more flavor to the cocktail, and it creates a drink with an overall thinner consistency. Because of how strong and robust the clam juice is, you won’t need to add as many spices as you would to create a Bloody Mary.

What Can You Pair With These Cocktails?

While we don’t often think of tomato juice or clam juice as a breakfast food, these two cocktails have made their way onto the breakfast and brunch menu, and both enjoy consistent popularity.

Creating a garnish bar at your next brunch gathering will be a great way to enjoy these two drinks. You can offer your guests garnishes ranging from traditional celery stalks to savory bloody mary meat straws. As a result, visitors will be able to get creative and craft a drink that’s truly their own. Of course, since it’s brunch, don’t forget to include some breakfast classics like Eggs Benedict or Belgian waffles!

Whether you’re crafting a Bloody Mary or Bloody Caesar for yourself or your guests at a party, you can turn to Benny’s Meat Straws for the original meat straw that allows you to provide an unforgettable garnish layout. No matter if you choose a jerky steak strip or stick, you’ll be able to enjoy a meat snack that was made from cattle in the USA.

Browse our meat snacks online and let us know if you have any questions!

« How to Make a Manly Bloody Mary